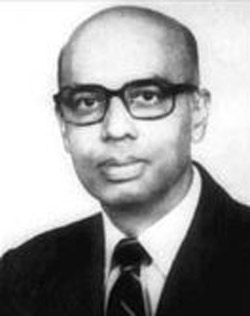 Vainu Bappu was a prominent Indian astronomer who did much to set up new observatories and astronomical research centers in his native country. His father was an assistant at the Nizamiah Observatory in Hyderabad, so that Bappu was exposed to astronomy from an early age. He won a scholarship to Harvard and co-discovered a comet, named Bappu-Bok-Newkirk, shortly after his arrival. Later he went to the Palomar Observatory where he and Colin Wilson discovered a relationship, now known as the Wilson-Bappu effect, between the luminosity of certain kinds of stars and some of their spectral characteristics. In 1953, he returned to India and worked at the Uttar Pradesh State Observatory before becoming director of the observatory at Kodaikanal, the oldest in India. He helped establish the Indian Institute of Astrophysics at Bangalore and set up the largest telescope in India, a 2.34-m reflector at the Kavalur Observatory – an instrument named in his honor in 1986.