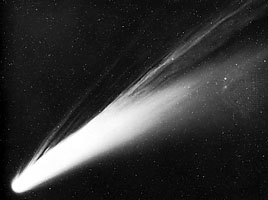 Comet Bennett (C/1969 Y1) is a long-period comet discovered on December 28, 1969, by the South African amateur astronomer John ("Jack") Bennett (1914–1990). Having reached perihelion on Mar 20, 1970, it put on a spectacular show throughout April 1970, reaching zero magnitude with a tail up to 30° long. Observations made with the fifth Orbiting Geophysical Observatory showed the head of the comet to be surrounded by a vast hydrogen cloud, spanning some 13 million km in the direction parallel with the tail.