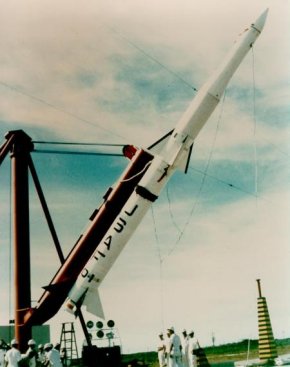 Blue Scout Junior was a smaller, US Air Force version of the Scout launch vehicle, which was used in the 1960s for suborbital military tests. The XRM-91 Blue Scout Junior (sometimes called Journeyman B) didn't look like the other Scout variants externally, because the usual first Scout stage (an Aerojet General Algol) wasn't used. Instead, the four-stage Blue Scout Junior used Scout's second and third stages (Castor and Antares) as the first two stages, and added an Aerojet General Alcor and a spherical NOTS Cetus in a common nose fairing.

The first launch of an XRM-91 took place on 21 September 1960, making it the first Blue Scout configuration to fly. The mission was supposed to involve radiation and magnetic field measurements at distances of up to 26,700 km (16,600 mi) from Earth, and while the rocket achieved this altitude, the telemetry system failed so that no data were received. The second launch in Nov ended with a failure during second stage burn. The third flight was to measure particle densities in the Van Allen belts and reached a distance of 225,000 km (140,000 mi), but again a telemetry failure prevented the reception of scientific data. The fourth and final XRM-91 mission, in December 1961, also carried particle detectors and was the only completely successful flight of the initial Blue Scout Junior program. The Blue Scout Junior would have been easily powerful enough to put a small satellite in low Earth orbit but was never used to do so.