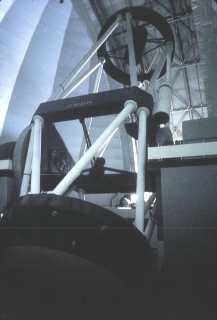 The Bol'shoi Teleskop Azimultal'nyi (BTA) is a 6-m telescope at an altitude of 2,070 m on the slopes of Mount Pastukhov on the northern side of the Caucasus range in Russia. Opened in 1976 it was the world's largest optical instrument, beating out the Hale Telescope, until the first of the telescopes at the Keck Observatory when into operation in 1993. Few detailed results from the BTA have appeared in the West and it is widely recognized that, although impressive in size, it suffers from a number of problems, including less-than-ideal climate, suspect optics, and a lack of state-of-the-art digital instrumentation.