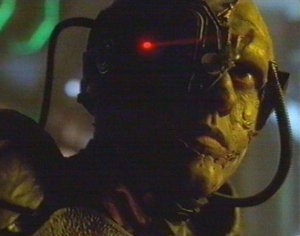 The Borg, in the Star Trek universe, is a race of cyborgs – part biological, part machine – from a distant part of our galaxy (the Delta Quadrant). They exist to assimilate other races, converting them into part of the Borg Collective and thus acquiring their knowledge. The Borg are numerous, technologically advanced, and utterly ruthless. They are organized like social insects; most notably they have a hive mind, in which different Borg perform set functions. A typical Borg is a drone, and they are ruled by the Borg Queen.

The Borg made their first appearance in the Star Trek Next Generation episode "Q Who," when the Q entity hurled the Enterprise into close proximity with a Borg Cube. Says Q to Picard:

"You can't outrun them. You can't destroy them. If you damage them, the essence of what they are remains ... they regenerate and keep coming. Eventually, you'll weaken. Your reserves will be gone. They are relentless."

In "The Best of Both Worlds," the Borg set out to assimilate the human race. Picard is captured, assimilated, and, as Locutus, forced to act as spokesperson for the invaders. At the Battle of Wolf 359 Starfleet's armada is almost wiped out and only last minute resistance from Picard saves the day.