Ants in a colony. 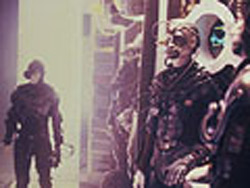 Hive intelligence is a decentralized, multicomponent mind, or appearance of mind, such as that displayed by social insects on Earth, notably ants, termites, and some species of bees. The hive centers and functions around the queen, who alone produces new individuals each of which is a slave to the needs and demands of the community. Indeed, the individual in such a 'superorganism' is akin to a single cell in the body of a conventional animal and quickly dies if it becomes separated. The cohesion and complex cooperative behavior of the hive is made possible by a tight communications, command, and control system which, in the case of social insects, is based upon the rapid transmission of pheromones.

So efficient and purposeful is a colony of ants that much has been written, particularly by science fiction authors, about the possibility of hive intelligence as the organizing principle in some extraterrestrial societies. This idea was taken up by H. G. Wells in his The First Men in the Moon (1901) and has been explored many times since.

In general, the prospect of a hive-like human community has been regarded as repugnant and the ultimate nightmare that might result from totalitarianism. Cold War era films such as Invaders From Mars (1953) and Invasion of the Body Snatchers (1956) drew a close parallel between the alien hive and the suppression of individualism under communist regimes. In his novel The Cosmic Rape (1958), Theodore Sturgeon pits humanity against "The Medusa," a galaxy-wide hive-mind empire that subsumes the conciousnesses of its intelligent conquests. This negative portrayal has continued with the Borg in Star Trek and their attempts to assimilate other sentient species into the "collective", although curiously it is the Federation – a cosmic extension of the United States – which tends, in the end, to do most of the absorption of other cultures. A different perspective on the loss of individuality and emergence of a group-mind is offered by writers such as Olaf Stapledon, in Star Maker, and Arthur C. Clarke, in Childhood's End, who foresee mankind's eventual melding with some form of broader, extraterrestrial consciousness as a triumph of transcendent evolution.