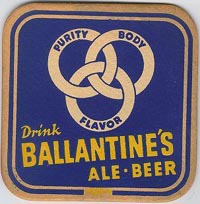 Borromean rings are three rings linked in such a way that although they can't be separated, no two rings are linked; remove any one ring, however, and the other two fall apart. Named after the Italian family of Borromeo whose family crest has borne the rings since the fifteenth century, the design has been used in many places and times as a symbol of strength in unity.

A form of the Borromean link known as Odin's triangle or the walknot ("knot of the slain") was used by the Norse folk of Scandinavia in two variants: a set of Borromean triangles and a unicursal curve that makes a trefoil knot. A motif of three interlaced crescent moons, similar to the Borromean rings, can be seen at the Palace of Fontainebleau; designed by the architect Philibert de l'Orme, it is based on the moon emblem used by Diane de Poitiers (1499–1566), mistress of King Henry II of France. A similar pattern, but with three interlaced snakes in place of the crescent moons, occurs at various sites in Wales, including Bangor Cathedral. The Borromean rings are commonly used as a symbol of the Christianity Trinity. An early source for this was a thirteenth-century French manuscript, now lost, in which the word "unitas" appears in the center, inside all the circles, and the three sylrables of "tri-ni-tas" are distributed in the outer sectors. Borromean Rings can be also be found on Japanese family emblems, at a Japanese Shinto shrine north of Sakurai in the province of Nara, and in the sculptures of the Australian artist John Robinson. In North America, the design is also known as the Ballantine Rings after the New Jersey Brewing company P. Ballantine and Sons who use it as a trademark with the rings labeled Purity, Body and Flavor.

The rings first appeared in mathematics in the earliest work on knots by Peter Tait in 1876. The pattern of circles can be interlaced by replacing each of the six vertices by a crossing that shows how the circles pass over and under one another. Since there are two choices for each crossing, there are 26 = 64 possible interlaced patterns. However, after taking symmetry into account, these 64 reduce to only 10 geometrically distinct patterns. Two patterns are considered to be the same if one can be obtained from the other by applying one or more of the following operations: rotation by 120°, reflection, and reflection in the plane of the pattern. The last symmetry operation means that the sense of all the crossings is switched. The rings can also be analyzed from the viewpoint of topology, which means that the designs are thought of as links made from a flexible and elastic material. If two links can be manipulated and deformed to look like one another (without breaking and joining the strings) then they are topologically equivalent. The 10 geometrically distinct patterns boil down to only five distinct topological types.