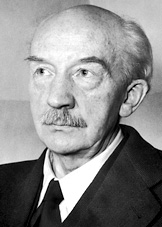 Walther Bothe was a German physicist. From 1934 he was director of the Max Planck Institute, Heidelberg, and 1946 was professor at the university there. During World War II he worked on German's nuclear energy project and built Germany's first cyclotron. He shared the 1954 Nobel Prize in Physics with Max Born for his development of the coincidence method which can detect two particles emitted simultaneously from the same nucleus during radioactive decay.