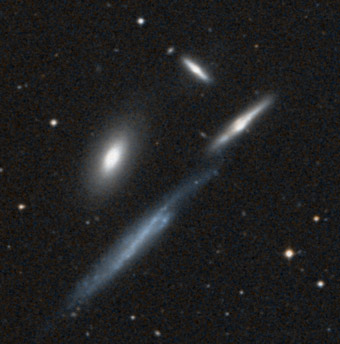 The Box (Hickson 61) is a very tight grouping of four galaxies in the constellation Coma Berenices that form a near perfect rectangle. Spanning just 3.8' of the sky, they all fit into the same medium-power field of view; particularly striking is how the two most elongated galaxies line up, forming virtually one long streak.

The brightest member, NGC 4169, is a magnitude 13.3 lenticular galaxy. NGC 4174 is a nearly edge-on magnitude 14.5 spiral. NGC 4175 is a magnitude 14.3 edge-on spiral that shows evidence of interaction with its apparent neighbor, NGC 4173, which is the largest of the four but the most difficult to see because of its low surface brightness. Three of the galaxies have recession velocities of around 2,900 kilometers per second, but, at 1,100 km/s, NGC 4173 is receding much more slowly and is not, despite appearances, physically associated with the others.