Fig 1. The life history of Fucus is often used as an example for the brown algae because species of this genus are common. The most usual form of reproduction is a specialized sexual process. On the tips of certain fronds are swollen areas known as receptacles (1). Male and female reproductive organs are produced on separate plants in cavities in the swollen areas. Male reproductive organs (antheridia) are released in spring as orange slime (2). Female reproductive organs (oogonia)(3) are similarly released as a green slime. When the seaweed is covered by the tide the antheridia (4) and oogonia (5) burst, releasing the reproductive cells into the water. The make gametes (6), 64 per antheridium, have two unequal flagella which they use to propel themselves. They fuse (8) with non-motile egg cells (7), eight peroogonium in the water. In a few other groups the gametes are as in Fucus, but in most groups all the gametes produced are motile. In all these groups non-sexual reproduction also occurs: the contents of some cells divide and are released as motile flagellate zoospores, which later develop into new plants. 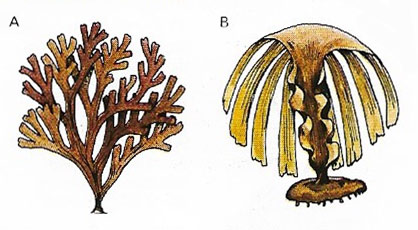 Fig 2. Brown algae range from small filamentous types to large plants with elaborate structures. Dictyota (A) is anchored by rhizoids and has thin flat fronds. New offspring are all of this kind. But in many brown algae two different kinds of offspring are produced. In furbelows (Saccorhiza polyschides) (B), the zoospores produce microscopic filaments, which in turn produce gametes. Fusion of gametes results in the growth of an organism with a frilled stem and fan-like frond.

Brown algae are organisms belonging to the phylum Phaeophyta of the kingdom Protista. Of the approximately 1,500 species of brown algae known, almost all are marine. They include many seaweeds, including the familiar wracks and bladder wrack, and the kelps, including the largest of all brown algae, Macrocystis – a genus of kelp that grows to more than 100 m (320 ft) at up to 0.5 m (18 in) per day. Sargassum forms vast floating masses in the Sargasso Sea in the mid-Atlantic, with their own distinctive communities of animals and microorganisms.

The brown algae have chlorophyll a and c, as well as carotenes and xanthophylls, including the brown pigment fucoxanthin which masks the green chlorophyll coloration.

Brown algae are very diverse in form and size, ranging from less than 1 mm long to some species that are among the largest photosynthetic organisms on Earth. The largest kelps may grow to more than 60 m in length, forming dense underwater forests in colder waters. Many microscopic brown algae grow as epiphytes on underwater vegetation, forming networks of branched filaments, or broad encrustations. All species are multicellular and do not form colonies. Their life cycles are complex, involving alternation of generations. In general, they are not free-floating organisms, but are attached to rock, coral, or other firm surfaces. A species of Sargassum is exceptional in being pelagic (open-sea dwelling), accumulating in large quantities in the Sargasso Sea near the West Indies and staying afloat by means of gas-filled bladders.

The main food reserve of brown algae is the polysaccharide laminarin. The cell wall consists of two layers: an inner one of cellulose and an outer one of mucilaginous pectic material. Asexual reproduction occurs by fragmentation of thallus or by mostly laterally biflagellate zoospores. Sexual reproduction is isogamous, gametes motile, or anisogamous.