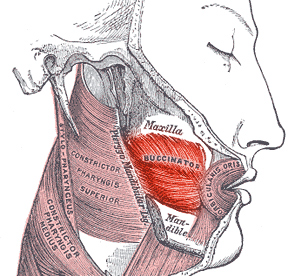 The buccinator muscle lies next to the mucus membrane of the cheek, and is an importance part of the substance of the cheek. It arises from the outer surface of the maxilla and the mandible opposite the sockets of the molar teeth, and, between those two bony attachments, it springs from the pterygomandibular ligament. That ligament is a bond of union between the buccinator and the superior constrictor muscle of the pharynx.


Action of the buccinator

The buccinator muscle, since it is supplied by the facial nerve, is not classified as a muscle of mastication, but it is used during mastication to press the cheek against the teeth and prevent the food from escaping into the vestibule of the mouth.

The buccopharyngeal fascia is the thin sheet of fascia that clothes the surface of the buccinator muscle and extends backwards to cover the constrictor muscles of the pharynx also. The parotid duct, on its way to the vestibule of the mouth, pierces the fascia, the buccinator, and the mucus membrane; the fascia and the muscle are pierced also by the nerves and vessels of the mucus membrane.

The buccal pad or "sucking pad" is a mass of fat, encapsulated in fascia, that lies on the buccinator and is partly tucked in between the buccinator and the masseter. It is pierced by the buccal nerves, by small vessels, and by the parotid duct. It thickens the cheek and helps it to resist atmospheric pressure during sucking. It is relatively much larger in an infant than in an adult; the rounded fullness of a child's cheek is due largely to the buccal pad.