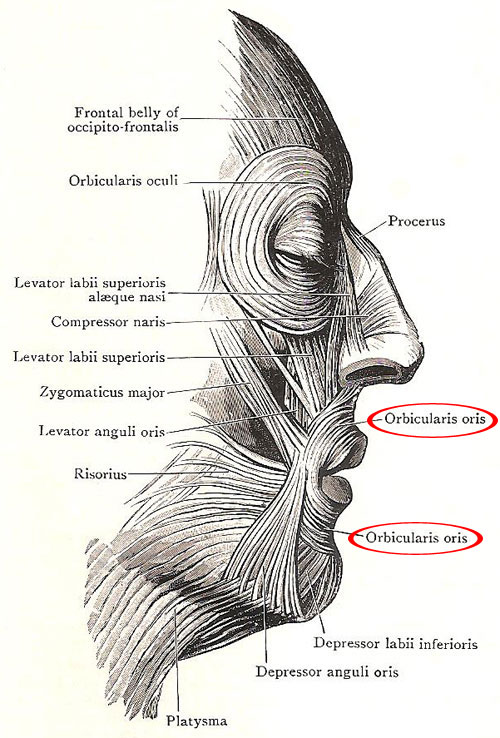 Muscles of the face, including the orbicularis oris. 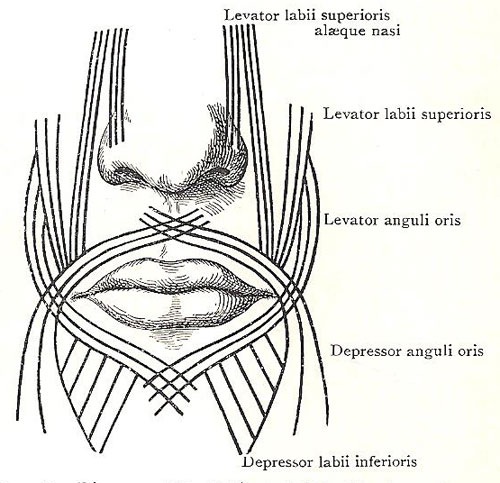 Diagram of the orbicularis oris muscle.

The orbicularis oris, a facial muscle, is the sphincter muscle of the mouth. It forms the greater part of the substance of the lips, lying between the skin and the mucus membrane, and extending from the edge of each lip to its root.

It is not a simple muscle composed of bundles arranged in concentric curves, like the orbicularis oculi. Besides some intrinsic fibers of its own, it is composed of the fibers of all the other muscles that converge on the mouth. (1) The intrinsic bundles pass obliquely between the skin and the mucus membrane. (2) Incisive slips arise from the jaws opposite the roots of incisor teeth and pass laterally into the lips. (3) The fibers of the other muscles converging upon the mouth mingle and sweep in curves through the lips – some obliquely and some transversely.

Owing to this complex arrangement, the movements of the lips are very varied – closing, pressing against the teeth, pursing, protruding, and twisting.

The zygomaticus minor is lateral to the levator; it is a mete slip. and is often absent. The zygomaticus major is both longer and thicker; it runs obliquely from the zygomatic bone to the angle of the mouth.

The platysma is a long, thin, wide sheet of muscle. It arises from the skin and fascia below the clavicle, ascends in the superficial fascia of the neck, and enters the face. Its anterior fibers are inserted into the anterior part of the lower border of the mandible; its posterior fibers ascend over the posterior part of the border, and curve forwards into the lips. The risorius lies horizontally opposite the angle of the mouth. It consists chiefly of the uppermost (or most posterior) bundles of the platysma.

The buccinator and levator anguli oris belong to the deep group of muscles.