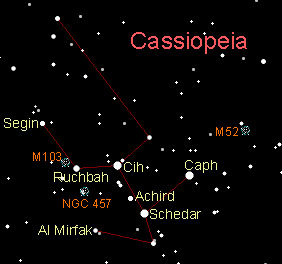 Caph (Beta Cassiopeiae) is a giant or subgiant F star that is the second brightest star in the constellation Cassiopeia. Its name comes from an Arabic phrase meaning "the stained hand" – the W-shape of this constellation being interpreted in Arab lore as the splayed fingers of a stretched hand that has been colored by henna.

In terms of its evolution, Caph is currently in the Hertzsprung Gap, a relatively short-lived stage (lasting a few tens of millions of years), in which its core will shrink while its outer layers expand to become a red giant. It is also unusual in being a Delta Scuti star – in fact, the brightest of this type – varying in brightness by about 6% over a 2.5-hour period. It has a small companion, about which little is known, in a 27-day orbit.