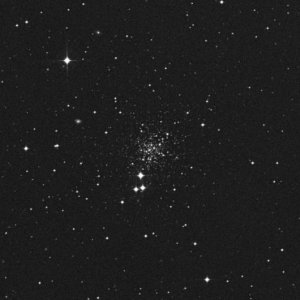 The Capricornus Dwarf (Palomar 12) is an object originally classified as a dwarf spheroidal galaxy by Fritz Zwicky (although he catalogued it with the wrong sign in declination) and presumed to be a member of the Local Group. Later it was found actually to be a remote globular cluster within our own galaxy, and catalogued as the twelfth object in the Palomar catalogue of globular clusters. Palomar 12 lies in the constellation Capricornus, about 62,000 light-years from the Sun and some 49,000 light-years from the galactic center at RA 21h 46.6m, Dec -21° 15'. According to one hypothesis, it may have escaped from the Sagittarius Dwarf Elliptical Galaxy to become part of the Milky Way's halo.