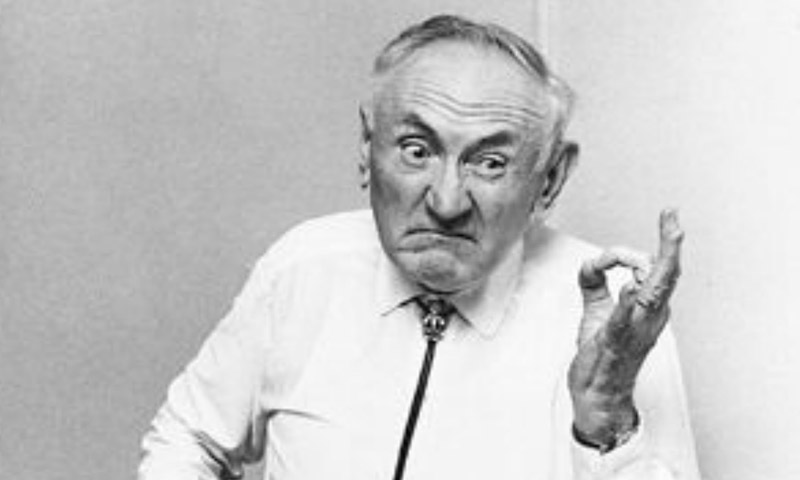 Fritz Zwicky was a Bulgarian-born Swiss astronomer who worked in the United States and was well known for his work on supernovae, compact galaxies, and intergalactic matter. He made many significant breakthroughs, among them the discovery of the dark matter permeating the Coma Cluster of galaxies. After Lev Landau proposed the existence of neutron stars – the extremely dense and compact remnant cores of once massive stars – in 1932, Zwicky with Walter Baade suggested that such objects might be left behind after supernovas.

Zwicky was also something of a character. On one occasion, while working at Palomar Observatory, he had the night assistant fire a bullet out the dome slit of the Hale Telescope in the direction the instrument was pointing to see if it improved the seeing (it didn't). In the January 19, 1934 edition of The Los Angeles Times, Zwicky was lampooned in an article accompanied by a cartoon entitled "Be Scientific with Ol' Doc Dabble." The article scoffed: "Cosmic rays are caused by exploding stars which burn with a fire equal to 100 million suns and then shrivel from 1/2 million mile diameters to little spheres 14 miles thick." In the polemical introduction to Zwicky's Catalogue of Selected Compact Galaxies and of Post-Eruptive Galaxies (1971), Zwicky quotes the cartoon and comments: "This, in all modesty, I claim to be one of the most concise triple predictions ever made in science." It correctly describes, he points out, the nature of origin of cosmic rays, supernovae, and the formation of neutron stars.

The Zwicky Catalogue is the popular name for the Catalogue of Galaxies and of Clusters of Galaxies (also referred to simply as "The Red Book") published in six volumes in 1961–68 by Fritz Zwicky and his colleagues. It contains 31,350 galaxies and 9,700 clusters recorded on plates of the Palomar Observatory Sky Survey and introduces a system of classifying clusters as compact, medium compact, or open that is still used. Compact galaxies identified in the Zwicky Catalogue are often known as Zwicky galaxies.