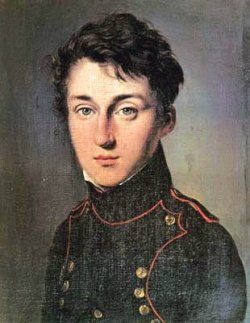 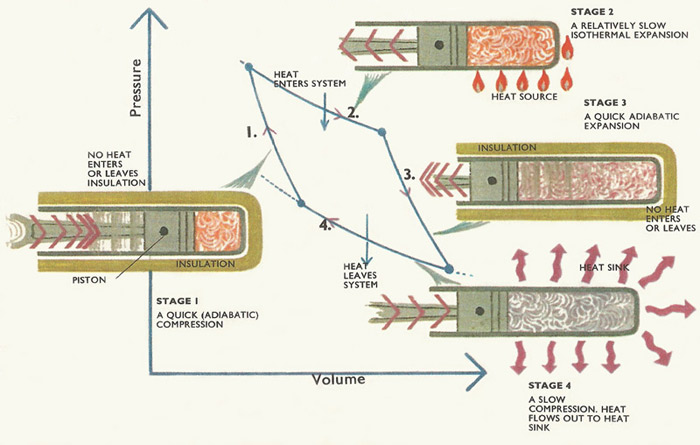 Sadi Carnot was a French engineer and physicist who, seeking to improve the efficiency of the steam engine (which was being developed at the time), devised the Carnot cycle (1824) on the basis of which William Thomson (Lord Kelvin) and Rudolf Clausius formulated the second law of thermodynamics. The Carnot cycle, which postulates a heat engine working at maximum thermal efficiency, demonstrates that the efficiency of such an engine does not depend on its mode of operation but only the temperatures at which it accepts and discards heat energy.

Carnot's major work, Réflexions sur la puissance motrice du feu (1824) contain ideas that were not completely understood at the time because he sometimes confused his terms, notably "amount of heat", "the motive power of heat", and a new quantity which became later known as entropy. In fact, his work was ignored until quoted and extended in 1834 by the railway engineer Emile Calpeyron and recognized in 1848 by Kelvin, who saw the importance of of the ideas, and rephrased them in a form we recognize today. Kelvin was even able to introduce an entirely new concept of temperature, and produced the Kelvin temperature scale, recognized as the only fundamental scale of temperature. The Kelvin temperature is based on the efficiency of a Carnot engine operating between two particular temperatures (one where it absorbs heat, one where it rejects it).

Carnot was born in Paris, studied at the Ecole Polytechnique, and became an officer in the Engineers. Unfortunately he caught cholera and died in Paris at the age of only 36.

Carnot's famous cycle is shown in Fig 2. Two isothermal (same-temperature) processes and two quick, adiabatic processes make up the cycle. Any kind of substance can be taken around a Carnot cycle.