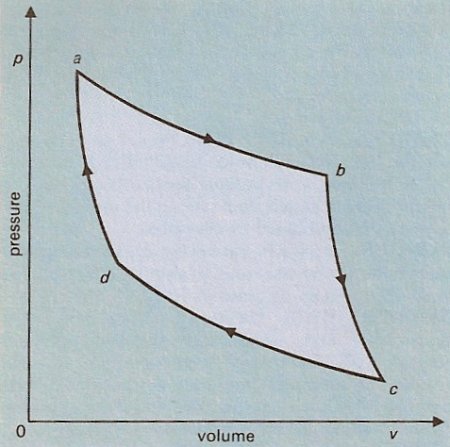 The Carnot cycle is the most efficient cycle of operations for a reversible heat engine. Published in 1824 by Sadi Carnot, it consists of four operations – two isothermal (same-temperature) and two adiabatic – on the working substance in the engine (refer to diagram):

1. (a → b) Isothermal expansion at thermodynamic temperature T1 with heat q1 taken in. Heat energy is absorbed from a high-temperature source at constant temperature. The volume increases while the pressure drops somewhat.

2. (b → c) Adiabatic expansion with a fall of temperature to T2. While the working fluid is thermally isolated (so that there is no heat transfer between it and its surroundings), the volume further increases while the temperature drops.

4. (d → a) Adiabatic compression at temperature back to T1. The fluid is compressed to its original state without transfer of heat to or from its surroundings.

The net result is that of the heat abstracted from the hot source, some, represented by the area abcd, is converted into mechanical (or electrical) work, the rest being rejected to the sink. According to the Carnot principle, the efficiency of any reversible heat engine depends only on the temperature range through which it works, rather than the properties of the working substances.

It's important to recognize that what Carnot describes is an idealized heat engine. It proved useful for showing how steam engines (which were then being developed) could operate most efficiently. It was also a forerunner of the internal combustion engine.