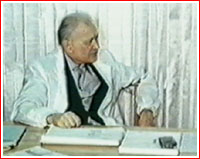 Vladimir Chelomei was one of the Soviet Union's three leading rocket designers in the early years of the Space Age, alongside Sergei Korolev and Mikhail Yangel. A specialist in applied mechanics, Chelomei headed the OKB-52 design bureau which produced a line of long-range cruise and ballistic missiles, radar surveillance satellites, the Proton launch vehicle, the IS antisatellite system, and the manned Almaz orbital complex. Chelomei's career peaked during Khrushchev's reign, when he tactfully hired the Soviet premier's son Sergei. With Khrushchev's patronage, Chelomei turned his small organization into a major space enterprise competing even with that of Korolev.

Born into a teacher's family in the small town of Sedletse, Chelomei moved to Kiev aged 12 and later attended the Kiev Aviation College, graduating in 1937. He earned the equivalent of a Master's degree in 1939 and was awarded the prestigious Stalin Doctoral Scholarship in 1940. In 1941, he joined the Baranov Central Institute of Aviation Motor Building (TsIAM) in Moscow where his main interest was pulse-jet engines. In 1944, the remains of a German pulse-jet-powered V-1 shot down in London were delivered to Moscow by British allies. In Jun, Chelomei was invited to the Kremlin where Stalin's deputy responsible for the aviation industry, Giorgiy Malenkov, asked him if the V-1 could be duplicated. Chelomei gave a confident reply and two days later found himself in charge of a new, 100-strong department at TsIAM. By the end of 1944 he had reproduced the German engine, and by mid-1945 had built a similar missile to his own design.

After the war, Chelomei proposed to the Soviet air force changes to his cruise missile which would enable it to be air-launched from long-range bombers. But the project ran into technical problems In 1953, the chief designer of the Soviet MiG fighters in cooperation with a design bureau led by Sergei Beriya (the son of Stalin's security chief) won approval for their own missile project and Chelomei's organization was absorbed by this more powerful competitor. But Chelomei's fortunes were set to change. In March 1953, Stalin died and Malenkov became premier. He remembered the young designer and helped him reestablish his collective. Chelomei started promoting his missiles for use aboard submarines, and in 1955 was made head of a new design bureau, OKB-52, to pursue his goals. In the face of stiff competition from experienced aviation designers such as Mikoyan, Iluyshin, and Beriev, Chelomei managed to get his P-5 cruise missile adopted for Navy use. This was the beginning of Chelomei's ascent, which culminated in the Khrushchev era. In the 1960s, as well as continuing to work on long-range cruise missiles, he pursued ambitious space projects, including the Almaz military space station. At first, he was able to compete successfully with both Korolev and Yangel. But his poor relationship with D. Ustinov, patron of the rocket industry, led him to fall from favor after Khruschev was deposed. He lost his biggest infrastructural gain made during the Khrushchev years: what is today the Khrunichev State Research and Production Space Center.