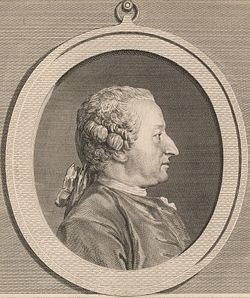 Alexis Clairaut was a French mathematician, born in Paris. He showed early on a remarkable aptitude for mathematics and was admitted to the Academy of Sciences at the age of only 18. Clairault wrote numerous scientific papers, but his fame rests principally upon his Théorie de la Figure de la Terre (1743), in which he promulgated the notion that the variation of gravity on the surface of the Earth, regarded as an elliptic spheroid, was altogether independent of the law of density; on his explanation of the motion of the lunar apogee, a point left unexplained by Newton; and on his computation of the time of the return of Halley's Comet.