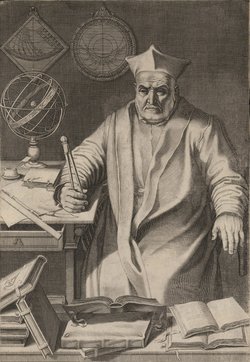 Christoph Clavius was a German Jesuit mathematician and astronomer who was one of the major architects of the Gregorian calendar reform of 1582. Born in Bamberg, Clavius joined the Jesuit order in 1555, and studied at Coimbra. He became professor of Mathematics at the Jesuit's Collegio Romano and remained in this post until his death.

In 1570 Clavius wrote what was to become one of the most influential textbooks on astronomy of its day, in the form of a commentary on the so-called Spheres of Sacrobosco. In the Catholic world, this was the textbook for three generations of astronomers, including Galileo, and most particularly for Jesuit astronomers throughout the world. In later editions of his book Clavius pronounced himself relatively favorable to the Copernican system as a mathematical model, but to the end of his life rejected its physical reality. Until Galileo's condemnation in 1633, this was also the official position of the Roman ecclesiastic authorities.

Clavius was chief astronomer at the Jesuit's Collegio Romano at the time of Galileo's first telescopic discoveries, and was still quite active despite his advancing age. He pronounced himself in favor of the physical reality of most of these telescopic observations. His doing so effectively silenced the first wave of opposition to Galileo. He did not agree with all of Galileo's interpretations however, and in particular remained staunchly opposed to the notion of mountains on the Moon.