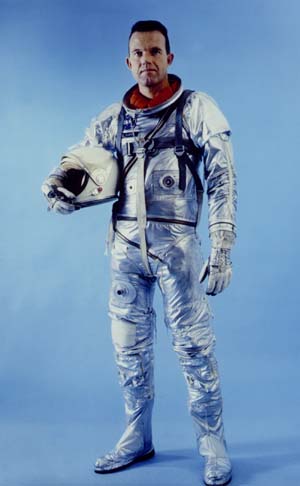 Gordon Cooper was one of the original Mercury Seven astronauts and the first man to go into orbit twice. Cooper flew the last and longest Mercury orbital mission and spent eight days in space aboard Gemini 5. He received a BS in aeronautical engineering from the Air Force Institute of Technology in 1956. Having received an Army commission, he transferred to the Air Force and flew F-84 and F-86 jets in Germany for four years. Back in the United States he received his degree then attended the Air Force Experimental Flight Test School at Edwards Air Force Base before being assigned as an aeronautical engineer and test pilot in the Performance Engineering Branch of the Flight Test Division at Edwards.

In 1959 Cooper was selected by NASA and on May 15–16, 1963, piloted his Faith 7 capsule on the sixth and final Mercury Project mission. Electrical problems near the end of the mission meant he had to manually fire his retrorockets and steer the capsule through reentry. Problems also beset Cooper on his next flight, a then-record eight-day trip aboard Gemini 5 in August 1965. Trouble with fuel supplies, power systems and a computer-generated command led Gemini 5 to land 166 km short of its designated target. Cooper retired from NASA and the Air Force in 1970, and was subsequently involved in technical research with several companies. His death, at the age of 77, came 47 years to the day after the launch of the world's first artificial satellite, Sputnik 1.