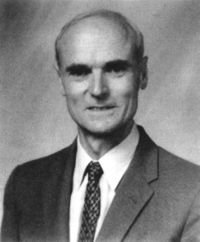 Harold Coxeter was a British-born, Cambridge-educated mathematician who spent most of his career (from 1936 on) at the University of Toronto and was regarded as the greatest classical geometer of his generation. Always known as "Donald," he is best known for his work on hyperdimensional geometries and regular polytopes.

In 1926, at the age of 19, Coxeter discovered a new regular polyhedron, having six hexagonal faces at each vertex. He went on to study the mathematics of kaleidoscopes and, by 1933, had enumerated the n-dimensional kaleidoscopes. His algebraic equations expressing how many images of an object may be seen in a kaleidoscope are now known as Coxeter groups. His research on icosahedral symmetries played an important role in the discovery by scientists at Rice University, Texas, of the carbon-60 molecule (see buckyball), for which they won the 1996 Nobel Prize in Chemistry.

Coxeter was a close friend of the artist M. C. Escher, whom he met in 1954, and also of Buckminster Fuller, who used Coxeter's ideas in his architecture. Indeed Coxeter's work was motivated by a strong artistic temperament and a sense of what is beautiful. Before he became a mathematician he had intended to be a composer but fascination for symmetry took him towards mathematics and a career about which he said "I am extremely fortunate for being paid for what I would have done anyway."