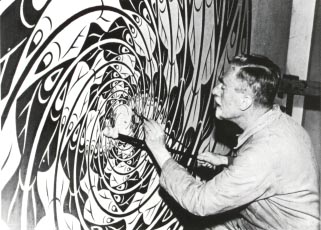 Maurits Escher was a Dutch artist whose graphic explorations of tiling, figure-ground ambiguities, impossible figures, and regression has attracted the interest of mathematicians and scientists. His experiences of Moorish art (see Alhambra) and his contact with mathematicians, most notably Harold Coxeter, led him to explore the way repetitive shapes can be used to tile the plane, and from this to ideas about duality and transformation. Escher's preoccupation with dualities is a constant presence in his work in the form of foreground/background, light and dark, flatness and dimensionality, representation and decoration, frame and scene, large and small, viewpoint and vanishing point, form and negative space, positive and negative, light and dark, observer and observed, as well as the metaphysical aspects of good and evil.

Self-referential images resonate throughout Escher's works – reflections of the artist, hands that draw themselves, the visitor in a picture gallery who looks at a print that contains him. It was for this reason that Douglas Hofstadter wove Escher, along with Kurt Gödel and Bach, into the "eternal golden braid" at the heart of his Pulitzer Prize-winning book.1 Having seen some of Escher's art, Roger Penrose was inspired to devise impossible figures, including the Penrose triangle, which Escher then incorporated into several of his later works. After the artist's death Penrose regretted that Escher had not lived long enough to take advantage of the discovery of Penrose tiling.