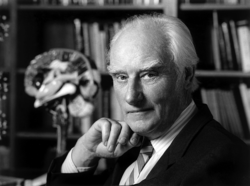 Francis Crick was an English molecular biologist who shared, with James Watson, the 1962 Nobel Prize in Physiology or Medicine for elucidating the double-helix structure of DNA. (The Prize was also shared with M. H. F. Wilkins who supplied X-ray data on which the discovery was based.)

Crick was led by his belief that the chances of life originating on Earth were very low to argue the case for panspermia and, in particular, a radical form of this hypothesis known as directed panspermia. More recently, Crick was involved with examining the possibility that RNA was the first replicator molecule on Earth during an early biological era known as the "RNA world". For the latter part of his career, he was at the Salk Institute, California.