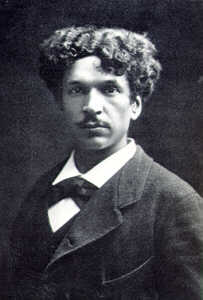 Charles Cros was a French poet and inventor whose work in several fields foreshadowed or paralleled important developments. He designed an automatic telegraph and displayed it at the World Fair of 1867. He sent to the Société française de photographie, in 1869, a system for reproduction of color images. Also, he delivered plans to the Académie des Sciences in 1877, for a device called a paléophone – a kind of gramophone – in advance of Edison's invention. Yet, despite his accomplishments, he died in poverty and was never given recognition for his discoveries in his lifetime.

In 1869, Cros proposed a method of sending signals to either Mars or Venus. It involved focusing the rays from one or more electric lights by parabolic mirrors. Periodic flashing of light from the mirrors would, he suggested, send the equivalent of a Morse code message. If the signals received a response, he said, "It will be a moment of joy and pride. The eternal isolation of the spheres is vanquished." Flashes reported by Messier, Schröter, and Harding on planets such as Venus, he suggested, might be attempts by the inhabitants to communicate with us. By 1870, his ideas had spread to Italy and England.

communication with the Moon and planets