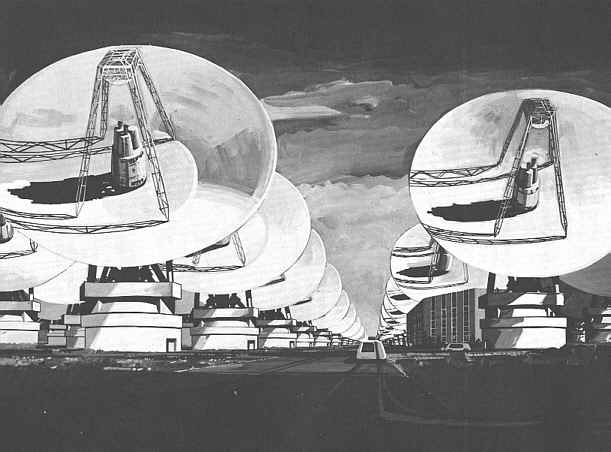 Project Cyclops was an ambitious scheme proposed in the early 1970s but never implemented, to deploy a vast array of steerable radio dishes in an attempt to eavesdrop on the radio transmissions from extraterrestrial civilizations. It had its origins in 1970 with a suggestion by John Billingham, then head of the Biotechnology Division at NASA Ames Research Center, to Ames Director Hans Mark that NASA should carry out a small-scale study of ways and means in SETI. The optimistic conclusions of this initial investigation prompted a more ambitious "design study of a system for detecting extraterrestrial intelligent life" conducted in 1971 as part of a summer faculty fellowship program in engineering systems at Stanford University (an annual event jointly sponsored by Stanford, NASA, and Ames). Participants included Billingham and Charles Seeger, but the central figure proved to be Bernard Oliver who originated the bold concept of a phased array of one thousand 100-m antennas covering a total area some 10 km across.

This giant, multi-component instrument would search the sky in the waterhole frequency band with sufficient sensitivity to be able to detect the stray radio emissions of a race at a similar level of technological development to that of humankind, over distances of several hundred light-years. Of course, Cyclops would also have been capable of detecting intentionally beamed messages over colossal, even intergalactic, distances. But in its ability to pick up the domestic radio "noise" of a civilization that, like our own, is not engaged in strenuous, full-time efforts at interstellar communication, it would have been unique. Being a phased array, it could have been built incrementally and operated at whatever capacity was available. If no signals were detected with a small "orchard", more dishes could have been added to boost the sensitivity until the full configuration was in place. The total (1971) price tag of $6-10 billion prove too daunting, however, and the proposal was rejected – although NASA did begin work on a much less ambitious SETI program a decade later (see High Resolution Microwave Survey).1