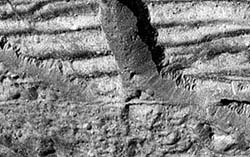 Chaotic terrain is part of a planetary surface where features such as ridges, cracks, smooth plains, and tilted slopes are jumbled together. Regions of this type occur, for example, in several places on Mars and on much of Jupiter's moon Europa.

Martian chaotic terrain, such as Gorgonum Chaos, is often found near to major outwash channels, suggesting it may be the result of water having run out from porous spaces underground and caused the ground above to become unstable. On Europa, vast regions of chaotic terrain occur where the surface ice layer has shattered into small blocks. These blocks appear to have rotated and tilted in a sea of soft liquid or slush, which then refroze and locked them in their new positions. Such activity is thought to be due to melt-through events, in which either localized tidal heating in the ice layer itself or an underlying volcanic heat source completely (though briefly) melted through the ice layer.