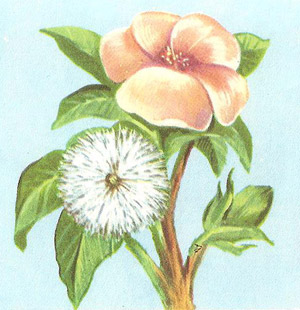 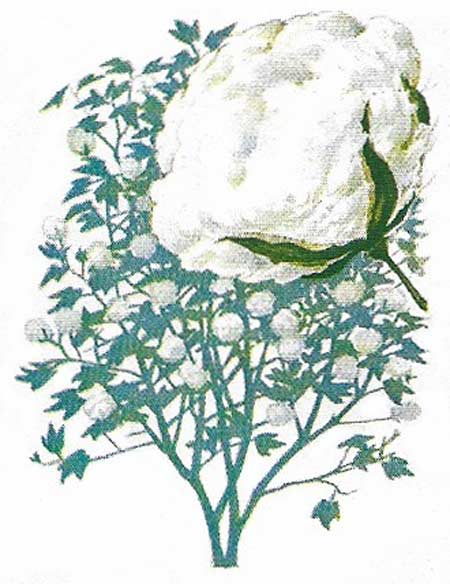 Fig 2. Cotton plant after the seeds have burst.

Cotton is a subtropical, woody-stemmed plant of the genus Gossypium, grown for the soft white fibers attached to its seed, which can be woven into cloth. Like other vegetable fibers, those of cotton are composed mostly of cellulose. In fact, the shorter fibers of the cotton plant supply most of the world’s pure cellulose and only the longer fibers are used for textiles.

The seeds are planted in the early spring and the plants bloom after four months. The white flowers redden and fall in a few days, leaving the seed pods, or bolls, which are fully grown in another month or so (Fig 1). These pods then burst, showing the white lint, which is picked either by hand or mechanically (Fig 2). Each fiber is a single cell, with numerous twists along its length, which give it excellent spinning characteristics.

The downy fiber is ginned (separated from the seed) and thoroughly cleansed. The fleece then goes through the carding machine which delivers it in one thick, soft, and continuous thread. It is then compressed, stretched, and twisted and sent to be spun.

The use of cotton fiber dates back a very long way, though not as far as flax and hemp. It was first manufactured on a large scale in India where the natives were wearing clothes made of cotton several centuries BC. The manufacture of cotton fabrics later spread to Persia and Egypt, from where it came to Europe in the 1st century AD.

The mechanization of the cotton processing industry was one of the first stages of the Industrial Revolution. It is still an important industry, although consumption of cotton has not risen since the development of man-made textiles.

Cotton products date back at least to 3000 BC in India and Central America. The highly durable and versatile fiber has been used for countless purposes ever since. The longest, high-quality fibres are made into laces and fine fabrics while coarser fibres are used to make sheets, carpets, blankets, sailcloth and industrial products such as thread, film, plastics, paper and cotton wool.

The great majority of the yarn from spinning mills is still made into cloth, the remainder being used in industry. The seed is now used for oils and cattle food, while small fibers are made into cellulose.

Despite its popular name, Eriophorum angustifolium, also known as common cottongrass or common cottonsedge, is not related to the true cottonplant but is instead a species of flowering plant in the sedge family, Cyperaceae. It is unsuited to textile manufacturing. However, in Northern Europe, it was used as a substitute in the production of paper, pillows, candle-wicks, and wound-dressings. The indigenous peoples of North America used the plant in cooking and in the treatment of digestive problems.