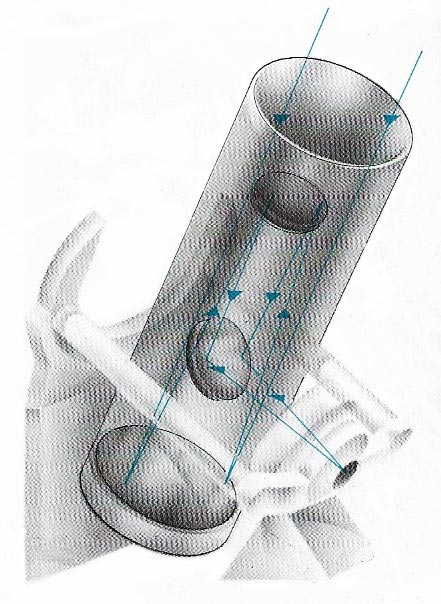 In the Coudé arrangement, there is a secondary mirror and an extra, rotatable mirror on the polar axis of the telescope.

A coudé focus is a telescopic focus used primarily for spectroscopy. In this arrangement light from the primary mirror is reflected along the polar axis to focus at a fixed place separate from the moving parts of the telescope, or in an entirely separate room of the observatory (the coudé room), where large pieces of equipment can be fitted without interfering with the telescope's balance. The word comes from a French word meaning "bent like an elbow," not from a person's name.

Since the light rays are reflected in a constant direction the image formed is stationary and the observer need not move as the telescope rotates. This has the great advantage that heavy and delicate equipment can be set up and need not be moved. Most modern reflectors allow for a Coudé focus and can be used according to several optical systems, which permits great versatility; in some telescopes the change over to a Coudé system can be made very quickly. It can also be used with refractors.