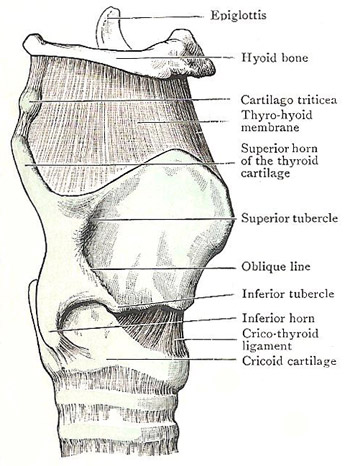 Veins on the surface of the heart.

The cricoid cartilage is a ring of cartilage that surrounds the trachea, or windpipe. It is located near the middle and center of the neck, is made of hyaline cartilage, and tends to ossify. The broad, posterior part, called the lamina, is quadrangular in outline. Its upper border is occupied by a pair of oval, convex facets separated by a shallow notch; these facets articulate with the bases of the arytenoid cartilages. The posterior surface of the lamina is divided by a median ridge into two areas which give origin to the posterior cricoarytenoid muscles. The median ridge itself gives attachment to a tendinous band which proceeds upwards from the longitudinal fibres of the esophagus. The anterior part of the cricoid cartilage is the arch. Its upper border slopes rapidly upwards as it passes backwards to the lamina, and gives attachment to the cricothyroid ligament and cricovocal membrane.