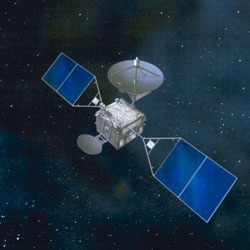 DRTS (Data Relay Test Satellite) was a Japanese satellite used to carry out experiments in inter-satellite communications. Traditionally, keeping in permanent contact with low-Earth-orbiting satellites has involved the use of a number of expensive ground stations. The idea of the DRTS project is to allow constant communication between mission control and an orbiting spacecraft by using the DRTS satellites as relay stations.

Originally, DRTS was two have consisted of two satellites, DRTS-W (West) and DRTS-E (East), each covering different sides of the globe to provide near-continuous coverage. But in August 2001, NASDA officials halted development and construction of the second spacecraft due to budget problems.

DRTS was built by primary contractor Mitsubishi Electric, with the communications equipment largely manufactured by NEC Toshiba Space Systems of Japan. Development costs were over $250 million in US dollars. The satellite, designed or at least a 7-year lifetime in orbit, utilizes S-band and Ka-band equipment for communications, with S-band largely involved in command transmissions and spacecraft telemetry relay due to its decreased sensitivity and lower volume capability. Ka-band will be used for image and science communications. DRTS's solar panels span about 17 m from tip-to-tip and produce 2.1 kW of power.

DRTS was launched with the USERS research and demonstration platform on the first operational launch of the H-2A (see H series) rocket.