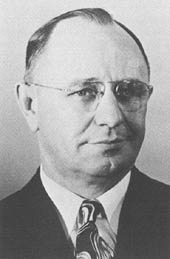 Smith DeFrance was an American aeronautical engineer who played a major role in wind tunnel design and experimentation before and during the birth of the Space Age. DeFrance was a military aviator with the Army's 139th Aero Squadron during World War I, then earned a BS in aeronautical engineering from the University of Michigan in 1922 before beginning a career with NACA (National Advisory Committee for Aeronautics). He worked in the flight research section at Langley Aeronautical Laboratory and designed its 9 × 18 m wind tunnel, completed in 1931 and the largest in existence at that time. He directed the research carried out in that tunnel, and designed others, before becoming director of the new Ames Aeronautical Laboratory in 1940, a position in which he remained until his retirement in 1965. During his time at Ames, the center built 19 major wind tunnels and conducted extensive flight research, including the blunt-body research necessary for returning spacecraft from orbit without burning up.