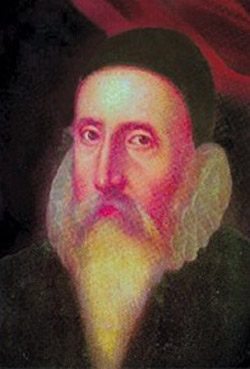 John Dee was a notable English alchemist, mathematician, and astronomer, sometimes referred to as the "last magician" because of his astrological services to Queen Elizabeth I. He encouraged the practical application of mathematics, supported the heliocentric theory of Copernicus, and may have influenced the writings of Shakespeare.

Dee enrolled at St. Johns College, Cambridge, at age 15, but found the atmosphere there stifling and later went to the Continent to study and lecture. Upon his return to England, Dee cast the horoscope for Queen Mary and later visited Mary's half-sister Elizabeth in jail to determine when Mary would die. Accused of black magic, he was jailed and then released in 1555, three years before Mary's death. When Elizabeth came to the throne she consulted Dee on many matters, including the geography of newly-discovered lands, and paid him well. Some of his income he spent on extensive traveling, which may have involving some spying on behalf of his sponsor.

Dee had a large library of books on witchcraft, the occult, and magic, and he wrote 79 manuscripts, only a few of which were published. He married three times and fathered eight children. He also struck up an uneasy partnership with Edward Kelly, a bad-tempered Irishman who claimed to have discovered the alchemical secret of transmuting base metal in to gold but had lost his ears for forgery. In 1585 Dee and Kelly went on a four-year trek across the Continent conducting astrological readings for nobility and royalty. But Dee and Kelly had many arguments and eventually parted company. Back in England Dee found his house ransacked and many of his possessions stolen or destroyed. Elizabeth help pay for the damage and made him warden of Christ's College in Manchester in 1595. However, Elizabeth died in 1603 and her successor James I opposed magic so that Dee was forced to retire, ending his life in poverty.