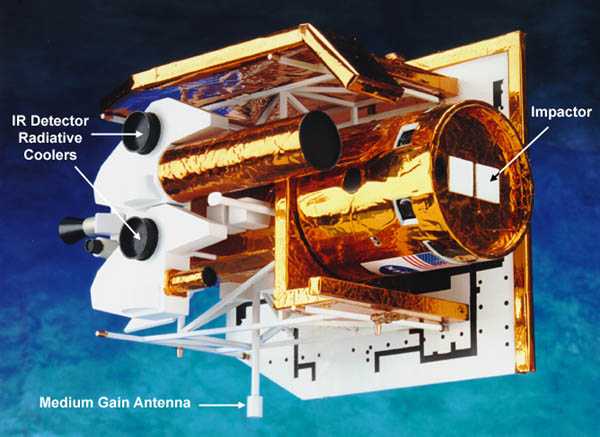 Deep Impact was a NASA/JPL mission to collide with a comet and study material thrown out by the impact from beneath the comet's surface. Deep Impact was launched on 12 January 2005 by a Delta II 7925 rocket from Cape Canaveral and encountered its primary target, comet Tempel 1, in July 2005.

The mission hardware consisted of a flyby spacecraft and a smart impactor that separated from the flyby probe 24 hours before collision. The 350-kg cylindrical copper impactor had an active guidance system to steer it to its impact on the sunlit side of the comet's surface at a relative velocity of 10.3 km/s.

Prior to collision, the impactor send back some of the best close-up images of a comet ever seen. The impact itself created a large fresh crater. Two visible imaging systems on the flyby craft recorded the impact events and the subsurface cometary structure, while two near-infrared imaging spectrometers determined the composition of the cometary material. This was the first mission to peer beneath the surface of a comet to its freshly exposed interior for clues to the early formation of the solar system. Images from the cameras on both the impactor and flyby craft were sent back to Earth in near real-time and made available on the Internet. The mission is under the direction of principal investigator Michael A'Hearn of the University of Maryland and is managed by JPL.

NASA extended the mission of Deep Impact and renamed it EPOXI, redirecting the spacecraft for a flyby of comet Hartley 2 on 4 November 2010. As it cruised toward the comet, EPOXI observed five nearby stars with transiting exoplanets, so named because the planets transit, or pass in front of, their central stars.