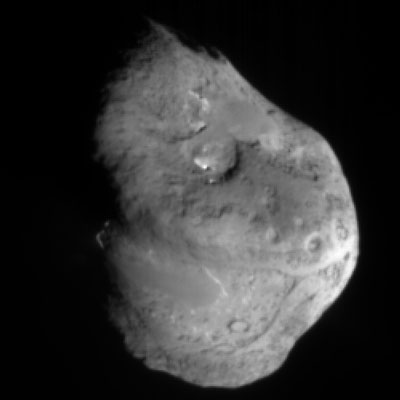 Comet Tempel 1 nucleus approx. 5 min before Deep Impact's probe smashed into its surface. It was taken by the probe's impactor targeting sensor. The Sun is to the right of the image. Smooth regions with no features (lower left and upper right) are probably younger than rougher areas with circular features, which are most likely impact craters. The probe crashed between the two dark-rimmed craters near the center and bottom of the comet.

Comet Tempel 1 (9P/) is a short-period comet discovered on April 3, 1867 by the German astronomer Wilhelm Tempel. The comet was then ninth magnitude and described by Tempel as having an apparent diameter of 4 to 5 arcmin across. Later calculations revealed that the comet had been situated 0.71 AU from Earth and 1.64 AU from the Sun at that time.

Comet Tempel 1 was the target for NASA's Deep Impact mission which successfully smashed a copper projectile into the comet's surface and observed the outcome of the impact from the flyby craft. On February 14, 2011, a second flyby of the comet was achieved, this time by the Stardust spacecraft, which re-examined the crater formed by the impactor.

Tempel 1 heats up and cool down rapidly, a thermal cycling that bakes the ices out of the material near the surface contributing somewhat to the comet's powdery consistency. Because large amounts of certain molecules appear in the gas ejected by the impactor's crash, it is suggested that the impact has excavated ices not normally boiled off into the coma and tail.

Solids entrained in the interior ice are swept out of Tempel 1 by the ices which are turning directly into gas. Some of these dust grains have enough momentum to carry them into the coma where they are swept away into the tail by the action of sunlight. Other grains with less energy fall back onto the surface of Tempel 1. This also contributes to the build up of powder on the surface.

Much more solid ejecta was expelled from the impact crater than astronomers expected. It is suspected that the dust is a silicate because the ejecta's cooling rate resembles that of liquid silica droplets.

The surface of Tempel 1 reveals an aging comet. There are a least three recognizable levels of topography that were probably not present when the comet formed. In the photo above is visible a smooth, relatively flat area, just below and to the left of center. The is bounded on its right edge by brightlines that are escarpments lit edge-on by the Sun. The scarps are about 20 meters high and at their foot there stretches away to the right a wishbone shaped lowland. In the lower part of the picture, you can see a couple of circular features. They are slightly darker than the surrounding material and, since they have a circular ridge, they are presumed to be impact craters.

The comet was well placed for its 1867 discovery thanks to its closest approach to Earth (0.568 AU) and its perihelion (1.562 AU), which occurred on May 15 and May 24, respectively. Over the next five months after its initial detection, subsequent observations were frequently made. The comet was last detected on August. 27, 1867 by Julius Schmidt, at which point the comet had become too faint for position measurements. At that time the comet was 1.30 AU from Earth and 1.81 AU from the Sun.

The comet was recovered on April 4, 1873 by E. J. M. Stephan of Marseille, France. The comet remained under observation until July 1 of that year.

Predictions were made for an 1879 return, with the most ambitious being that of Raoul Gautier who computed definitive orbits from the two previous appearances before making his predictions for the upcoming return. Gautier's predictions enabled Tempel to recover the comet on Apr 25, 1879. The comet was observed until its last detection on July 8.

In 1881, comet Tempel 1 passed 0.55 AU from Jupiter. Due to gravitational interactions, the comet's orbital period was increased to 6.5 years and the perihelion distance was increased from 1.8 AU to 2.1 AU, making the comet an even fainter object. Subsequently, the comet was lost and it was not observed at its next expected return. Photographic attempts during 1898 and 1905 failed to recover the comet.

During 1963, B. G. Marsden conducted an investigation as to why comet Tempel 1 became lost. He found that further close approaches to Jupiter in 1941 (0.41 AU) and 1953 (0.77 AU) had decreased both the perihelion distance and the orbital period to values smaller than when the comet was initially discovered. These approaches moved Tempel 1 into its present libration around the 1:2 resonance with Jupiter. Subsequently, Marsden published predictions for the 1967 and 1972 returns in his paper "On the Orbits of Some Long Lost Comets."

Despite an unfavorable 1967 return, Elizabeth Roemer of the Catalina Observatory took several photographs during 1967. Her initial inspections of these photographs revealed nothing. However, in late 1968 she re-examined the photographic plates and found that a single exposure taken on June 8, 1967 held the image of an 18th magnitude diffuse object very close to where Marsden had predicted the comet to be. Unfortunately, the single image did not provide definitive proof of the comet's recovery.

During 1972, Marsden's predictions allowed Roemer and L. M. Vaughn to recover the comet on Jan 11 from Steward Observatory. The comet became widely observed and reached a maximum brightness of magnitude 11 during May of that year. The comet was last seen on July 10. This apparition proved that the single image taken by Roemer in 1967 was indeed Comet 9P/Tempel 1. Since that time the comet has been seen at every apparition. It will next return to perihelion in 2011.


Tempel 1 before its discovery