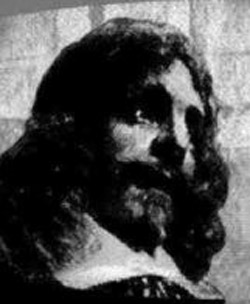 Girard Desargues was a French mathematician who is regarded as the chief founder of perspective geometry.

His 12-page treatise La perspective (636) consists of a single worked example in which Desargues sets out a method for constructing a perspective image without using any point lying outside the picture field. He considers the representation in the picture of plane of lines that meet at a point and also of lines that are parallel to each another. In the last paragraph of the work he considers the problem of finding the perspective image of a conic section. Three years later, he wrote his treatise on projective geometry Brouillon project d'une atteinte aux evenemens des rencontres du cone avec un plan. The first part of this deals with the properties of sets of straight lines meeting at a point and of ranges of points lying on a straight line. In the second part, the properties of conics are investigated in terms of properties of ranges of points on straight lines and the modern term "point at infinity" appears for the first time. Desargues shows that he has completely grasped the connection between conics and perspective; in fact he treats the fact that any conic can be projected into any other conic as obvious.

Given such innovative work it may seem surprising that the subject didn't develop rapidly in the following years. That it didn't may be partly due to mathematicians failing to recognize the power of what had been put forward. On the other hand the algebraic approach to geometry put forward by René Descartes at almost exactly the same time (1637) may have diverted attention from Desargue's' projective methods.