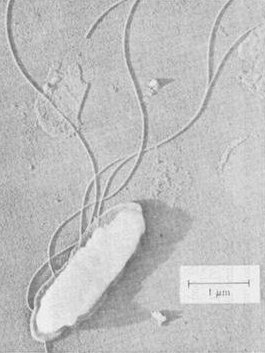 Desulfotomaculum is a genus of anerobic, rod-shaped bacteria that reduce sulfates, sulfites, and other sulfur compounds. These bacteria stain gram-negative but have gram-positive cell walls. The name "Desulfotomaculum" derives from the sulfur-reducing action (de- + sulfo-) and the shape (the Latin tomaculum means "sausage"). Three species (nigrificans, ruminis, and orientis) were the first to be described in 1965. About 20 different species have now been identified in a variety of environments, including soil, water, and geothermal regions, and in the intestines of insects, and in the contents of animal rumens.

In 2006, a new strain of Desulfotomaculum was found at a depth of 3 to 4 km in the Mponeng gold mine near Johannesburg, South Africa. This is the first type of life on Earth definitively shown to exist completely independently of photosynthesis. It was recovered from ancient water in a crack in basalt rock. Uranium and other radioactive elements in the rock give off radiation that breaks apart water molecules, producing energized hydrogen gas that is able to cleave chemical bonds. The bacteria exploit this hydrogen gas to turn sulphate molecules from the rock into hydrogen sulphide in an energy-trapping process that is the equivalent of photosynthesis.

The discovery of light-independent life forms is of great interest to astrobiologists since it increases the likelihood of finding similar creatures on other worlds, such as Mars.