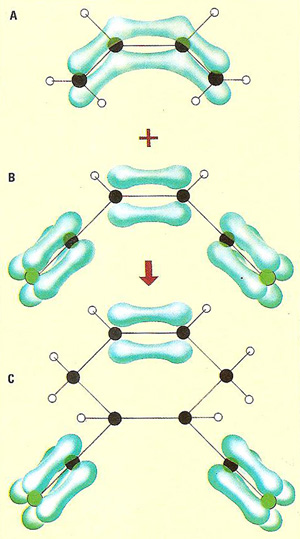 A Diels-Alder reaction, also known as diene synthesis, is a reaction discovered by Otto Diels and Kurt Alder, which is important in many chemical syntheses, including those involved in making some plastics, insecticides, and fungicides.

A conjugated diene, such as 1,3-butadiene isoprene, adds readily to a "dienophile" containing a double or triple bonded activated by an adjacent nucleophile group.

The Diels-Alder reaction has served an important role in many syntheses because it smoothly and stereospecifically unites two carbon compounds. A six-membered ring is formed by 1,4-addition of an alkene unit to a conjugated diene. The alkene unit (known as the dienophile) has electron-withdrawing groups which activate the diene.

The upper illustration here shows a Diels-Alder reaction using molecular orbitals. The addition reaction is shown by the rearrangement of the electron clouds.


Key (to upper illustration) A) Butadiene. This is a conjugated diene (two double bonds separated by a single bond). It is shown is the s-cis form and has the property of undergoing 1.4 addition very easily.

B) 1,2-dintrile ethene. This is the dieneophile, and the electron-withdrawing or accelerating groups are nitrile groups. It is these that activate diene.