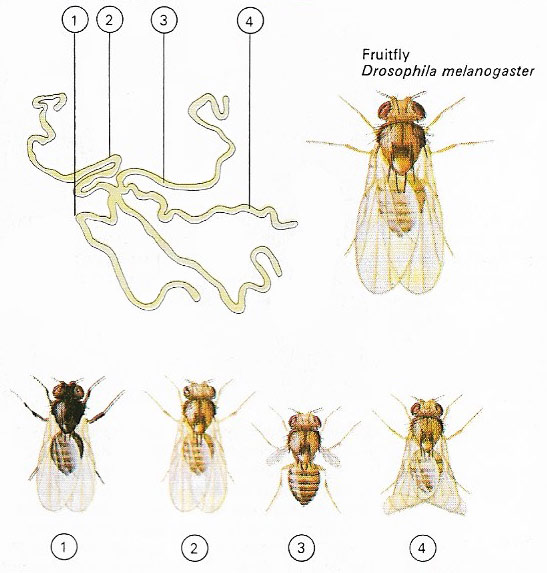 The fruit fly Drosophila melanogaster is a favorite of geneticists because it takes up little space, reproduces every 10 to 15 days and its cells contain only four pairs of chromosomes. Geneticists have mapped many genes on these chromosomes. For example, genetic damage at 1 produces bar-shaped eyes; at 2, sepia bodies; at 3, lack of wings; and at 4, curly wings. Drosophila also has giant chromosomes whose basic structure can be seen by looking at cells in the salivary glands. They have bands across them and each band is now thought to correspond exactly to a gene.

Drosophila is a genus of small flies (family Drosophilidae), commonly called fruit flies, which contains about 1,500 known species. The best known of these is Drosophila melanogaster which has been used extensively in laboratory studies of genetics. D. melanogaster has the advantages of being easily bred, has a short generation time, and can be easily obtained in mutant form. It was used by Thomas Hunt Morgan in his pioneering work that established the relationship between genes and chromosomes.