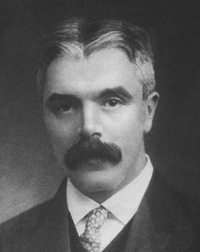 Frank Dyson was the ninth Astronomer Royal (1910–1933); the son of a minister, he studied mathematics and astronomy at Trinity College, Cambridge, and then spent his entire career, except for five years in Edinburgh, at the Royal Greenwich Observatory. There, he directed measurements of terrestrial magnetism, latitude, and time, and he initiated the radio broadcast of time. He determined proper motions of northern stars and completed his portion of the international Carte du Ciel project of photographing the entire sky. Dyson is best known for directing, with Arthur Eddington, the 1919 eclipse expedition, which confirmed the bending of starlight by the Sun's gravity, as predicted by Einstein's general theory of relativity.