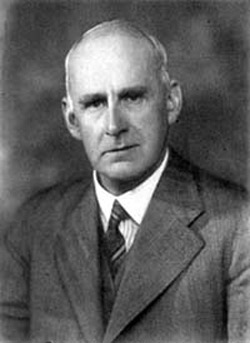 Arthur Eddington was an English astronomer and astrophysicist who pioneered the theoretical study of stellar structure. Through his Mathematical Theory of Relativity (1923), he did much to introduce the English speaking world to the theories of Albert Einstein.

Educated at the universities of Manchester and Cambridge, he spent seven years as chief assistant at the Royal Greenwich Observatory and 41 as Plumian Professor at Cambridge. He made important investigations of stellar dynamics, and was an influential supporter of the view that the spiral nebulae were external galaxies. He contributed much to the introduction of Einstein's general theory of relativity into cosmology, writing books on the new theory for both his fellow scientists and the public, and led one of the two 1919 solar eclipse expeditions that confirmed the predicted bending of starlight by gravity.

Eddington's greatest contributions concerned the astrophysics of stars. He dealt with the importance of radiation pressure, the transfer of energy by radiation, the mass-luminosity relation, pulsations in Cepheid variables, and the very high densities of white dwarfs, and was among the first to argue that subatomic reactions must power the stars.

The Eddington limit is the theoretical limit at which the radiation pressure of a light-emitting body would exceed the body's gravitational attraction. A star emitting radiation at greater than the Eddington limit would break up. This would happen, for example, to a star of more than about 120 solar masses, or to the Sun if its luminosity were increased by a factor of 30,000. The Eddington limit, named after Arthur Eddington, is given by

where G is the gravitational pressure, M is the mass of the luminous object, mp is the mass of a proton, c is the speed of light, and σT is the effective area of an electron when it is illuminated by radiation.

Eddington arrived at this outrageous conclusion after a series of convoluted (and wrong!) calculations in which he first "proved" that the value of the so-called fine-structure constant was exactly 1/136. This value appears as a factor in his prescription for the number of particles (protons + electrons; neutrons were not discovered until 1930) in the universe: 2 × 136 × 2256 = 17 × 2260 = 3.149544... × 1079 (double the number written out in full in the quote above). This is the Eddington number, notable for being the largest specific integer (as opposed to an estimate or approximation) ever thought to have a unique and tangible relationship to the physical world.

Unfortunately, experimental data gave a slightly lower value for the fine-structure constant, closer to 1/137. Unfazed, Eddington simply amended his "proof" to show that the value had to be exactly 1/137, prompting the satirical magazine Punch to dub him "Sir Arthur Adding-One."