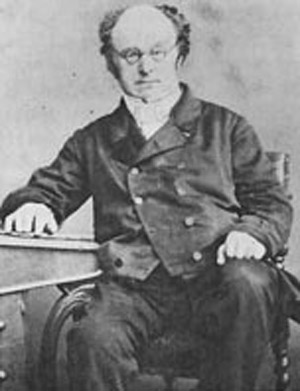 Augustus De Morgan was a British mathematician, born in India, who was an important innovator in the field of mathematical logic. The system he devised to express such notions as the contradictory, the converse, and the transitivity of a relation, as well as the union of two relations, laid some of the groundwork for his friend George Boole. De Morgan lost the sight of his right eye shortly after birth, entered Trinity College, Cambridge, at the age of 16, and received his BA. However, he objected to a theological test required for the MA and returned to London to study for the Bar. In 1827, he applied for the chair of mathematics in the newly-founded University College, London and, despite having no mathematical publications, he was appointed. In 1831, he resigned on principle after another professor was fired without explanation but regained his job five years later when his replacement died in an accident. He resigned again in 1861.

His most important published work, Formal Logic, included the concept of the quantification of the predicate, an idea that solved problems that were impossible under the classic Aristotelian logic. De Morgan coined the phrase "universe of discourse," was the first person to define and name mathematical induction, and developed a set of rules to determine the convergence of a mathematical series. In addition, he devised a decimal coinage system, an almanac of all full moons from 2000 BC to AD 2000, and a theory on the probability of life events that is still used by insurance companies. De Morgan was also deeply interested in the history of mathematics. In Arithmetical Books (1847) he describes the work of over fifteen hundred mathematicians and discusses subjects such as the history of the length of a foot, while in A Budget of Paradoxes he gives a marvelous compendium of eccentric mathematics including the poem:

the first lines of which paraphrase a similar rhyme by Jonathan Swift. On one occasion, when asked his age, De Morgan replied: "I was x years old in the year x." How old must he have been at the time? (Answer: 43 – the only number that, when squared, gives a number between the years of De Morgan's birth and death.)

De Morgan's laws are a pair of rules in propositional logic and Boolean algebra first formalized by De Morgan in 1850. Although the rules are fairly intuitive and may even seem trivial – indeed logicians have used them since at least the 4th century BC – De Morgan was the first to incorporate them into a system of formal logic.