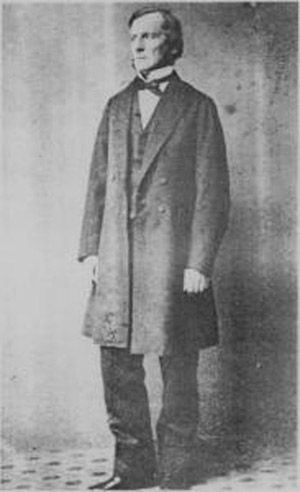 George Boole was an English mathematician and philosopher who is regarded as one of the founders of computer science. His great contribution was to approach logic in a new way, reducing it to a simple algebra and thus incorporating logic into mathematics. He pointed out the analogy between algebraic symbols and those that represent logical forms; his algebra of logic became known as Boolean algebra and is now used in designing computers and analyzing logic circuits.

Boole was born in Lincoln, the son of a cobbler who apparently had some mathematical knowledge and who made optical instruments in his spare time. George had a simple elementary schooling, and as much help in the pursuit of learning as his father could give him, but he was largely self-educated. He studied the classics at first, and learned to read Latin, Greek, French, German, and Italian. At the age of 16 he began his career as a teacher, at a school in Doncaster, Yorkshire; he later had a school of his own in Lincoln. It was not until he was 17 that he began the serious study of mathematics. Within a few years he was writing original papers, and corresponding with leading mathematicians of the time. His book The Mathematical Analysis of Logic – a precursor of Laws of Thought – appeared in 1847, when he was 32; and by then he had published other mathematical work of lasting value. In 1849 his standing was recognized by his appointment to the chair of mathematics at Queens College, Cork, Ireland.

In his fortieth year Boole married Mary Everest, a niece of his friend Ryall, the Professor of Greek at Cork. (Another of her uncles was George Everest, a native of Breconshire, who achieved great distinction as a surveyor and military engineer; he made the first accurate determination of the position and height of the Himalayan mountain that was named after him.) She was a woman of strong character who in later life wrote quite extensively on educational matters. Her collected works occupy four volumes.. The first item in this collection has the title 'Home side of a scientific mind', and is an affectionate memoir of her husband (whom she survived by more than 50 years). Here she records that he took seven years to write the Laws of Thought, and that he wished he had taken 15; she also relates that, as a girl, she read part of it in manuscript (several years before their marriage) she did not fully understand it but 'got a vague sense of safety and comfort from finding it proved that all our thinking was under the shelter of algebraical laws, even when we were not conscious of using mathematical symbols'. Another item is her book Lectures on the Logic of Arithmetic, published in 1903: 'Pure Mathematics is the class of all propositions of the form "p implies q", where p and q are propositions containing one or more variables, the same in the two propositions, and neither p nor q contains any constants except logical constants'). She and George had five children, all daughters.

One day in 1864, George Boole walked the two miles from his home to the College in pouring rain and then lectured in wet clothes. A fever followed but whether this alone would have caused his demise is unknown. Certainly his condition wasn't helped by his wife, Mary (a niece of Sir George Everest, after whom the mountain is named), who, following the principle that remedy should resemble cause, put Boole to bed and threw buckets of water over him. He expired shortly after.

Nowadays, a good approach to Boole's symbolic logic is by the abstract concept of a ring. This is a powerful unifying concept in modern mathematics; it was implicit in the work of some of the 19th-century algebraists, but has been explicitly recognized and studied only in the last 50 years. The type of ring that is relevant here is a so-called Boolean ring. This obeys the usual commutative, associative, and distributive laws of rings, but also obeys the law that

for every x. A Boolean ring is necessarily commutative, so that any proposition that is valid for commutative rings in general is valid in particular for any Boolean ring; the binomial theorem is such a proposition. But the algebra of Boolean rings is uncommonly simple: for instance, it is permissible to write

which, of course, is incorrect in the ordinary algebra of numbers (unless x or y is 0); another feature of Boolean rings is that x - y is always the same as x + y.

To give an example of a Boolean ring, consider the class of all individuals of some particular kind – say, for the sake of illustration, the class of all animals (assuming that this class can be unambiguously defined). Let the letters x, y,... be used to denote subclasses of this given class, and let us adopt the following interpretation for the symbols x + y and xy: whatever subclasses we choose to denote by x and y, x + y shall denote the class of those individuals that belong either to the class x or class y but not to both, and xy shall denote the class of those individuals that belong both to x and to y. Thus if x denotes the class of horned animals, and y the class of sheep, then xy denotes the class of horned sheep; we could write this alternately as yx (sheep that are horned). Provided we admit the concept of an 'empty' or 'zero' class (having no members) we now have a system which is closed with respect to the operations of 'adding' and 'multiplying' classes; and it is a simple matter to verify that this system is a Boolean ring.

We can construct a Boolean ring in this way by considering the subclasses of any given class; in each case the ring has a unit element, namely the whole of the given class. For any such ring, the assertion that x is a subclass of y can be expressed by the equation

The symbol 1 + x (or, equivalently, x + 1) denotes the subclass consisting of those individuals that belong to the given class, 1, but not to the particular subclass x. To assert that x and y are disjoint (have no members in common) we can write

and by the standard rules about brackets, this equation can be written in the equivalent form

alternatively, we can write simply

with the understanding that the symbol 0 stands for the empty class.

Let us now suppose that we have chosen our unit class (which for Boole was 'the Universe') so that it includes the class of 'all that is mortal', the class of all men, and the class whose only member is Socrates; and let us denote these classes by x, y, and z respectively. Then the proposition 'all men are mortal' can be expressed by the equation

We are not saying that this proposition is true, but merely that if we wish to assert it we can do so in this way.) Likewise, the proposition 'Socrates is a man' can be expressed by the equation

From these two equations we infer, by substitution from the first into the second, that

(the symbol xyz has the same meaning as (xy)z and x(yz).) Multiplying both sides of this equation by x, we have

Thus far, we have proceeded as in ordinary algebra. But now we may note that, since we are working with a Boolean ring, x2 is the same as x, so that

This, with our earlier equation z = xyz. implies that

Now this last equation expresses the proposition 'Socrates is mortal'. Thus we have passed from the premise of a syllogism to its conclusion by a process of algebraic manipulation.

These simple illustrations may give some idea of the way in which Boole brought algebra and logic together. However, it should be pointed out that in one important respect we have not followed Boole exactly: he assigned a meaning to the symbol x + y only when the classes x and y were disjoint; his algebraic system was therefore not a ring, since it was not closed with respect to addition. Others, notably Augustus de Morgan, a contemporary of Boole, who became the first president of the London Mathematical Society (which was founded a few weeks after Boole's death), wrote x + y for what is now called the union of the classes x and y, consisting of all individuals that belong to either or both of these classes; this gave a closed system which, however, failed to be a ring since it was not subject to the law of subtraction.