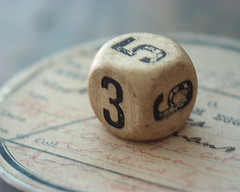 Fig 1. An unusual die that has numerals on its faces rather than patterns of dots. 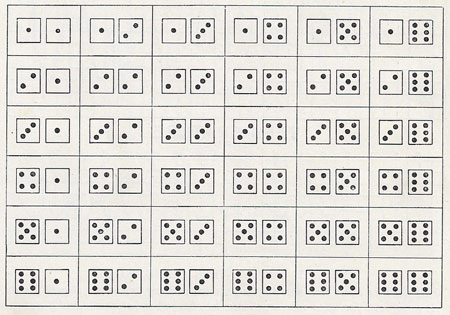 Fig 2. In many games two dice are thrown together. All the 36 throws shown above are equally likely. The least likely scores are 2 and 12. 2 only occurs once, in the top left corner. The chance of throwing 2 is thus 1 in 36. It is 35 to 1 against 2 being thrown. The same applies to the score of 12. What are the chances of the other scores? What is the most likely score?

Dice are small polyhedra, usually cubes, whose faces are numbered from one to six by patterns of dots, with opposite sides totaling seven. They are thrown, singly or in groups, from the hand or from a cup, on to a flat surface, to provide random numbers for gambling and other games. The face of each die that is uppermost when it comes to rest provides the value of the throw. Typical of their use today is the game of craps, in which two dice are thrown together, and bets placed on the total face-up value (see Fig 2). Dice probably evolved from knucklebones, which are approximately tetrahedral. Even today, dice are sometimes colloquially referred to as "bones." Ivory, bone, wood, metal, and stone materials have been commonly used, though the use of plastics is now nearly universal.

Dice found in ancient tombs in the Orient point to an Asiatic origin and dicing is mentioned as an Indian game in the Rig-veda. In its primitive form knucklebones was essentially a game of skill, played by women and children; gradually, a derivative form evolved for gambling in which four sides of the bones received different values and were counted like dice. Gambling with three, sometimes two, dice was a popular form of amusement in Greece, especially with the upper classes, and was an almost invariable accompaniment to the symposium, or drinking banquet. The Romans were passionate gamblers, and dicing was a favorite form, though it was forbidden except during the Saturnalia. Throwing dice for money led to many special laws in Rome, one of which decreed that no suit could be brought by a person who allowed gambling in his house, even if he'd been cheated or assaulted! Professional gamblers were common, and some of their loaded dice are preserved in museums.

The Roman historian Tacitus states that the Germans also were passionately fond of dicing – so much so, that, having lost everything, they would even stake their personal liberty. Centuries later, in medieval times, dicing became the favorite pastime of knights, and both dicing schools and guilds of dicers flourished.

Dice are frequently used to randomize allowable moves in board games such as backgammon. Loaded dice can be made in many ways to cheat at such games. Weights can be added, or some edges made round while others are sharp, or some faces made slightly off-square, to make some outcomes more likely than would be predicted by pure chance. Dice with non-cubical shapes were once almost exclusively used by fortune-tellers and in other occult practices, but they have become popular lately among players of role-playing and war-games.