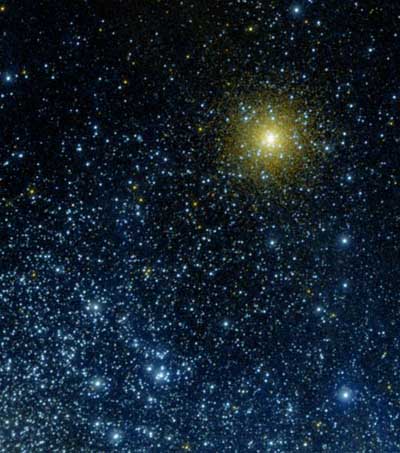 In this image of the globular cluster NGC 362 (located 30,000 light-years away), obtained by the Galaxy Evolution Explorer, the light blue dots surrounding the core are extreme horizontal branch stars. Blue dots scattered throughout the image are hot, young stars in the Small Magellanic Cloud, a satellite galaxy of the Milky Way located approximately 200,000 light-years away. The stars in this galaxy are much brighter intrinsically than EHB stars, but they appear just as bright because they are farther away. The blue stars in the Small Magellanic Cloud are only about a few tens of millions of years old, much younger than the approximately 10-million-year-old stars in NGC 362. Because NGC 362 sits on the northern edge of the Small Magellanic Cloud galaxy, the blue stars are denser toward the south, or bottom, of the image. Image credit: NASA/JPL-Caltech/Univ. of Virginia.

A star like our sun spends most of its life fusing hydrogen atoms in its core into helium. When the star runs out of hydrogen in its core, its outer envelope will expand. The star then becomes a red giant, which burns hydrogen in a shell surrounding its inner core. Throughout its life as a red giant, the star loses a lot of mass, then begins to burn helium at its core. Some stars will have lost so much mass at the end of this process, up to 85% of their envelopes, that most of the envelope is gone. What is left is a very hot ultraviolet-bright core, or extreme horizontal branch star.