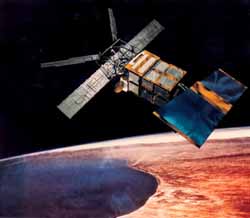 The satellites provided systematic, repetitive global measurements of wind speed and direction, wave height, surface temperature, surface altitude, cloud cover, and atmospheric water vapor level. Data from ERS-1 were shared with NASA under a reciprocal agreement for Seasat and Nimbus 7 data. ERS-2 carries the same suite of instruments as ERS-1 with the addition of the Global Ozone Measuring Equipment (GOME) which measures ozone distribution in the outer atmosphere. Having performed well for nine years – more than three times its planned lifetime – the ERS-1 mission was ended on March 10, 2000, by a failure in the onboard attitude control system.

The length of its operation enabled scientists to track several El Nino episodes through combined observations of surface currents, topography, temperatures, and winds. The measurements of sea surface temperatures, critical to the understanding of climate change by the ERS-1 Along-Track Scanning Radiometer were the most accurate ever made from space. All these important measurements are being continued by ERS-2.