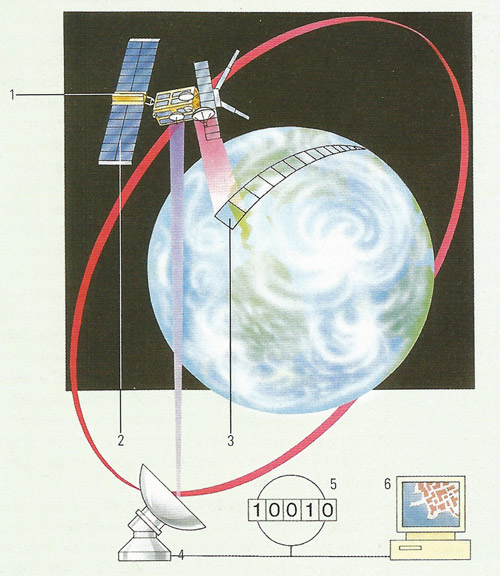 Remote sensing satellites (1) view the Earth from space using various sensors and cameras. These instruments are classed as either active or passive. Passive devices, such as optical cameras and infrared scanners, pick up reflected radiation (either light or heat). Active instruments on the other hand send out radio pulses and record the returning signal. One of the strengths of active scanning is the ability to see through cloud. Powered by a solar sail (2), the satellites use orbits which take them above the whole of the Earth during a series of days (3). Images of the Earth's surfaces are beamed down to ground stations (4) in digital form (5), and are converted into pictures by computers (6).

Remote sensing is the observation of Earth from distant vantage points, usually by or from satellites or aircraft. Sensors, such as cameras, radio frequency receivers, radar systems, sonar, seismographs, gravimeters, magnetometers, and scintillation counters, mounted on these platforms capture detailed pictures of Earth that reveal features not always apparent to the naked eye.

The technology of modern remote sensing began with the invention of the camera more than 150 years ago. Although the first, rather primitive photographs were taken as "stills" on the ground, the idea and practice of looking down at Earth's surface emerged in the 1840s when pictures were taken from cameras secured to tethered balloons for purposes of topographic mapping. Perhaps the most novel platform at the end of the last century is the famed pigeon fleet that operated as a novelty in Europe. By the first World War, cameras mounted on airplanes provided aerial views of fairly large surface areas that proved invaluable in military reconnaissance. From then until the early 1960s, the aerial photograph remained the single standard tool for depicting the surface from a vertical or oblique perspective.

Satellite remote sensing can be traced to the early days of the space age (both Russian and American programs) and actually began as a dual approach to imaging surfaces using several types of sensors from spacecraft. In 1946, V-2 rockets acquired from Germany after World War II were launched to high altitudes from White Sands, New Mexico. These rockets, while never attaining orbit, contained automated still or movie cameras that took pictures as the vehicle ascended. Then, with the emergence of the space program in the 1960s, Earth-orbiting cosmonauts and astronauts acted much like tourists by taking photos out the window of their spacecraft.

The term "remote sensing," first used in the United States in the 1950s by Ms. Evelyn Pruitt of the US Office of Naval Research, is now commonly used to describe the science – and art – of identifying, observing, and measuring an object without coming into direct contact with it. This process involves the detection and measurement of radiation of different wavelengths reflected or emitted from distant objects or materials, by which they may be identified and categorized by class/type, substance, and spatial distribution.

An instrument that quantitatively measures the intensity of electromagnetic radiation in some band of wavelengths in the spectrum. Usually a radiometer is further identified by the portion of the spectrum it covers; for example, visible, infrared, or microwave.

A radiometer that includes a scanning capability to provide a two-dimensional array of pixels from which an image may be produced is called an imaging radiometer. Scanning can be performed mechanically or electronically by using an array of detectors.

A device designed to detect, measure, and analyze the spectral content of the incident electromagnetic radiation is called a spectrometer. Conventional, imaging spectrometers use gratings or prisms to disperse the radiation for spectral discrimination.

A radiometer that can measure the intensity of radiation in multiple wavelength bands (i.e., multispectral). Often the bands are of a high spectral resolution – designed for the remote sensing of specific parameters such as sea surface temperature, cloud characteristics, ocean color, vegetation, trace chemical species in the atmosphere, etc.

Active instruments provide their own energy (electromagnetic radiation) to illuminate the object or scene they observe. They send a pulse of energy from the sensor to the object and then receive the radiation that is reflected or backscattered from that object. Scientists use many different types of active remote sensors.

A lidar uses a laser (light amplification by stimulated emission of radiation) to transmit a light pulse and a receiver with sensitive detectors to measure the backscattered or reflected light. Distance to the object is determined by recording the time between the transmitted and backscattered pulses and using the speed of light to calculate the distance traveled. Lidars can determine atmospheric profiles of aerosols, clouds, and other constituents of the atmosphere.

A laser altimeter uses a lidar (see above) to measure the height of the instrument platform above the surface. By independently knowing the height of the platform with respect to the mean Earth's surface, the topography of the underlying surface can be determined.