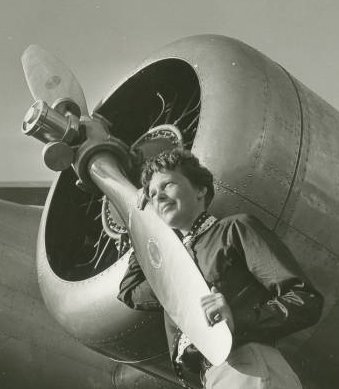 Amelia Earhart was a pioneering American aviator, nicknamed "Lady Lindy" because her achievements were comparable to those of Charles Lindbergh.

Born on July 24, 1897, in Atchison, Kansas, Earhart was encouraged by her parents from a young age to take part in activities usually left to boys, such as football, baseball, and fishing. Their encouragement, watching numerous air shows in Los Angeles, and paying a pilot a dollar for a 10-min airplane ride all contributed to her decision to become a pilot and join this predominantly male field. After her first ride, she wrote, "By the time I had gotten two or three hundred feet off the ground, I knew I had to fly."

From 1921 to 1922, Earhart was taught to fly by Neta Snook, the first woman to graduate from the Curtiss School of Aviation. In October 1922, Earhart received her pilot's license from the Federation Aeronatique Internationale. Soon after, on October 22, 1922, Earhart set a women's altitude record of 14,000 ft (4,200 m) in a Kinner Canary, an open-cockpit, single-engine biplane.

Charles Lindbergh made his record-setting solo flight across the Atlantic Ocean in 1927. One of the people inspired by his feat was flying enthusiast Amy Guest, who hoped to be the first woman to cross the Atlantic. She purchased a plane but her family vetoed the trip. Earhart went in her place and became the first female to cross the Atlantic Ocean. Leaving Newfoundland, Canada, on June 4, 1928, Earhart joined Wilmer L. Stutz and Louis E. Gordon in their bright red Fokker F.VII named the Friendship on their 2,000-mile (3,219-km) trip to Wales. Earhart had no part in piloting the plane during the 20-hr, 40-min trip and was, in her words, "just baggage," making her even more eager to cross the Atlantic on her own.

In 1929, Earhart cofounded an organization whose goal it was to advance women's participation and opportunities in aviation. Called the Ninety-Nines, the organization was composed of 99 charter members, representing 99 of the 117 licensed women pilots in the United States at the time.

On May 20–21, 1932, Earhart accomplished her goal of flying solo across the Atlantic Ocean. She took off from Newfoundland, Canada, at 7:12 pm on May 20, in her Lockheed Vega. Her flight was filled with dangers, from rapidly changing weather to a broken altimeter so she could not tell how high she was flying, to gasoline leaking into the cockpit. At one point her plane dropped almost 3,000 ft (914 m) and went into a spin (which she managed to pull out of) and flames were shooting out of the exhaust manifold. She brought her plane down on the coast of Ireland after a harrowing trip lasting 15 hr and 18 min The flight was the second solo flight across the Atlantic and the longest nonstop flight by a woman – 2,026 mi (3,261 km) – as well as the first flight across the Atlantic by a woman. President Herbert Hoover awarded her the National Geographic Society Medal on Jun 21, 1932, for her achievement, and the US Congress awarded her the Distinguished Flying Cross, the first woman to receive such an honor. Earhart's accomplishment meant a great deal to the entire world, but especially to women, for it demonstrated that women could set their own course in aviation and other fields.

Her next major achievement was to set the women's nonstop transcontinental speed record. On August 24-25, 1932, she flew from Los Angeles, California, to Newark, New Jersey, in a record 19 hr 5 min, flying a Lockheed Vega, also becoming the first woman to fly solo coast-to-coast. The next July she set a new transcontinental speed record, making the same flight in a record 17 hr 7 min.

In January 1935, Earhart became the first woman to make a solo long-distance flight over the Pacific Ocean, flying from Honolulu, Hawaii, to San Francisco, California. This complicated flight in her second Lockheed Vega occurred in adverse weather conditions and demonstrated Earhart's courage as well as her stubbornness. She followed that flight with two more first solo flights – one on April 19-20 from Los Angles, California, to Mexico City, in 13 hr 23 min and the second on May 8, 1935, from Mexico City to Newark, New Jersey, in 14 hr 19 min.

Earhart wanted to be the first of either gender to fly around the world at its widest, close to the equator. She acquired the most advanced long-range, non-military aircraft available – a Lockheed Model 10E Electra. The all-metal, two-engine plane had been reconfigured with extra fuel tanks replacing the passenger seats, allowing the plane to travel farther between refuelings.

Her first attempt at the world flight began on March 17, 1937, in Oakland, California, but ended abruptly with a runway crash in Honolulu, Hawaii, after a tire blew and a shock absorber on the landing gear failed. Earhart decided to repair the damaged plane and try again.

The flight began again on May 20, 1937, this time heading from Oakland to Miami, Florida. But it was plagued with mechanical problems along the way that resulted in further delays. Eventually she and Fred Noonan, her navigator, reached Miami and made final adjustments to the plane's engines and instruments. Finally, Earhart and Noonan were ready to depart.

What turned out to be the final flight of Earhart's career, and, ultimately, her life, began on June 1, 1937. Earhart and Noonan left for their round-the-world flight from Miami, Florida, in her twin-engine, red-winged Electra. From Miami, they flew to San Juan, Puerto Rico. Right before taking off on this leg of the flight, Earhart was quoted as saying, "I have a feeling there is just about one more good flight left in my system and I hope this trip is it. Anyway, when I have finished this job, I mean to give up long-distance 'stunt' flying."

Their next destination, and the most dangerous stop of the trip, was Howland Island, a tiny island in the Pacific Ocean, 2,556 miles (4,113 km) away. Before Earhart took off from Lae on July 1, there was confusion about which radio frequencies were to be used, which remained unresolved before she took off. As the scheduled time neared for Earhart to approach the island, several transmissions were received from her, demanding to know the weather. A new weather report describing heavy clouds and rain northwest of Howland had been issued, and Earhart had apparently run into the storm. Earhart transmitted several more times but never reached her destination, disappearing somewhere off the coast of the island. A large search party was quickly organized, but no remains of the crew and the plane were ever found.

There are many theories surrounding the controversial disappearance of the plane on July 2, 1937. The most commonly accepted theory is that the fliers got lost, ran out of gas, and went down somewhere in the Pacific Ocean. However, as war between the United States and Japan was imminent, there were rumors that Earhart had been on a spy mission for the United States and was supposed to photograph Japanese military installations. This theory says that she crash-landed and was captured by the Japanese, who imprisoned or executed her. A third theory was that her disappearance was staged to allow the US Navy to conduct a search in the South Pacific.

The Star Trek: Voyager episode, "The 37s," (1995) features Amelia Earhart and Fred Noonan among a group of individuals who were kidnapped in 1937 by aliens (the Briori), placed in stasis, and brought to the Delta Quadrant. There they are found in 2371 by Captain Kathryn Janeway and her crew. Earhart and the others decide to remain and make a new life for themselves on the other side of the Galaxy.