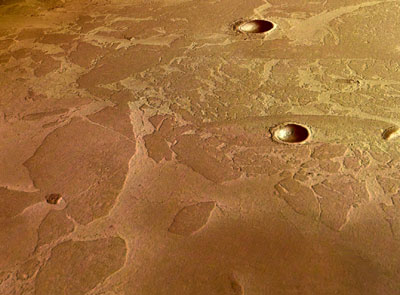 A flat plain that is part of Elysium Planitia. The image, taken by the Mars Express spacecraft, shows what some scientists think is a dust-covered frozen sea. The scene is a few tens of kilometers across, centered on latitude 5°N and longitude 150°E. 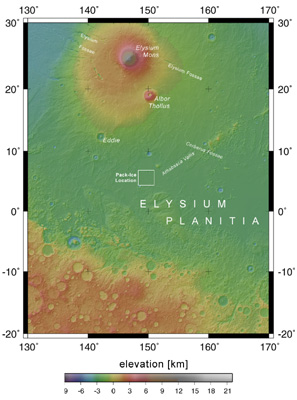 Map showing the location of the image at top.

Elysium Planitia is the second largest volcanic region on Mars after Tharsis Montes. It lies on a broad dome measuring about 1,700 by 2,400 km (1,060 by 1,490 miles) in size. Located on Elysium Planitia are the volcanoes Elysium Mons, Hecates Tholus, and Albor Tholus.

In 2005, an international team of geologists studying images returned by Mars Express theorized that a frozen sea once existed on Elysium Planitia. They drew their conclusions from patterns seen in the ground near Athabasca Vallis, a region at 5°N and 150°E, about 1,180 km (730 miles) south of Elysium Mons.

The idea is that that there was an eruption of water from deep underground and a subsequent catastrophic flood that covered a wide area. Where the water ended up formed an enclosed basin, about 800 by 900 km (500 by 560 miles) and roughly 45 m (150 ft) deep – similar in size and depth to the North Sea on Earth.

Water flowing into the basin would have ponded and frozen over quickly. Plate-like surface features that resemble pack ice on Earth, clearly visible in the Mars Express photos, may still harbor buried blocks of ice, protected by a layer of volcanic ash, the researchers suggested.

Another recent finding by Mars Express has increased the interest in this region. The probe's Planetary Fourier Spectrometer has detected elevated concentrations of methane in the atmosphere over the Elysium Planitia. Other scientists, however, dispute the amount of the methane concentrations. On Earth, nearly all methane has a biological origin, but the gas can be produced by volcanic processes.