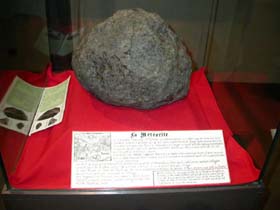 The Ensisheim meteorite is the oldest meteorite whose fall can be dated precisely. On November 7, 1492, near noon, a loud explosion preceded the arrival of a 127-kg stone meteorite in a wheat field near the village of Ensisheim in the province of Alsace, France, which at the time was part of Germany. An old woodcut depicting the scene shows the fall watched by two people emerging from a forest. In fact, a young boy was the only eyewitness and he led the local populace to the field, where the meteorite lay in a hole a meter deep. After it was retrieved, the townsfolk, believing the object to be of supernatural origin, begin to chip off bits for souvenirs, until stopped by the local magistrate. Many of these fragments ended up in museums around the world. The remaining specimen, a rounded gray mass weighing only 55 kg and nearly without any fusion crust, can be seen today at Ensisheim resting in an elegant case in the middle of the main hall of the Regency Palace built in 1535 by the emperor Ferdinand of Austria.